The Dwarf in the Dirt

Stephen Fry returns as Dr. Gordon Wyatt. Booth, still suffering some lingering effects from his brain surgery, has to get re-certified for FBI marksmanship, but is not the accurate shot he was before going under the knife. He and Brennan investigate the death of a little person who was a former wrestling star. 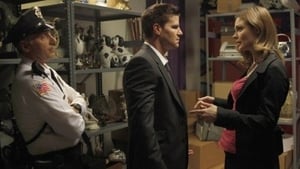