A Night at the Bones Museum

Brennan and Booth are called to investigate what appears to be charred human remains on an electrical fence. The mysterious corpse is later determined to be a mummified Egyptian royal on loan to the Jeffersonian. The anthropological mystery has Brennan in a tizzy, and when the Jeffersonian curator prepping the mummy for exhibition is murdered, the team suspects foul play. Brennan’s investigation of the curator sheds new light on the life of the Egyptian royal, turning their case into one of historic proportions. Meanwhile, Brennan goes on a date with Booth’s supervisor and former intern, and Sweets’ girlfriend Daisy Wick (guest star Gallo) returns to the Jeffersonian. 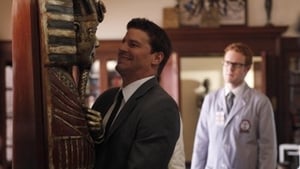