The Beaver in the Otter

When a human body is found inside the strung up Otter mascot uniform of a rival school, Brennan and Booth investigate whether the body inside the costume was dead beforehand, or killed during a Middlesex University bonfire event. The body is identified as Jimmy “Beaver” Bouvier, a fraternity brother at Middlesex University. When Brennan and Booth question his fraternity brothers, they learn that Beaver had a money-making operation on the side and was making a killing of his own. Meanwhile, Booth offers to help his brother Jared find a new job after being dishonorably discharged from the Navy. 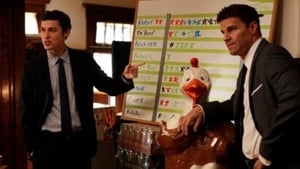