Out of the Blue

While strange earth tremors plague the area, Mitch tries to get Jordan to meet her real biological mother on a fishing outing, who turns out to be a white woman named Rene, who’s dying from a brain disorder and thinks the problem is hereditary. But things take a turn after a massive rouge wave, triggered by an underwater tremor, capsizes the fishing boat and traps Rene below decks in a room with toxic fumes. 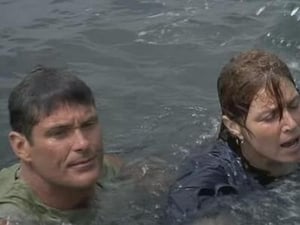